On the next day my second host give me a green light, so I made a move to Cascais, a 40 minutes train drive toward west of Lisbon. It is a small city on a lovely beach side, where more or less the richest Portuguese live and bunch of tourist walk. My host house was located 15 minutes of drive to the North in Malveira da Serra, which turned out to be a great hiking spot. Unfortunately Eduardo didn’t have much time because of his work, but I used the time to discover the jungle and was getting lost in the woods. The two evenings were spent in great spirits with nice talks, but I needed to get moving to Sintra, because I wanted to check that climbing area. 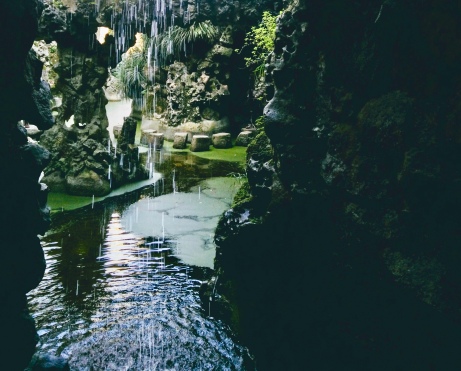 Sintra is a tiny town with castles in magnificent parks and a popular tourist point, so these tourist traffic makes the prices rise a bit 😛 . I didn’t get a couchsurf there, so I went for a hostel and got to know some cool foreigners that stayed there as well. The truth of the matter is, that I actually spent most of my time outdoors and I came there just to sleep and eat breakfast. On the day of my arrival I went by myself on an exploring tour. Usually I read some guide books before I go on a trip, but now I just looked through the internet to see where can I climb in Portugal and made a brief plan where I would like to go, but that was all… I wanted to get surprised, so I didn’t make a schedule or a “must do and see list”, so I wasn’t influenced by others sightseeing criteria, but rather getting stunned by eye-catchers defined by my personal criteria.

Almost at the top 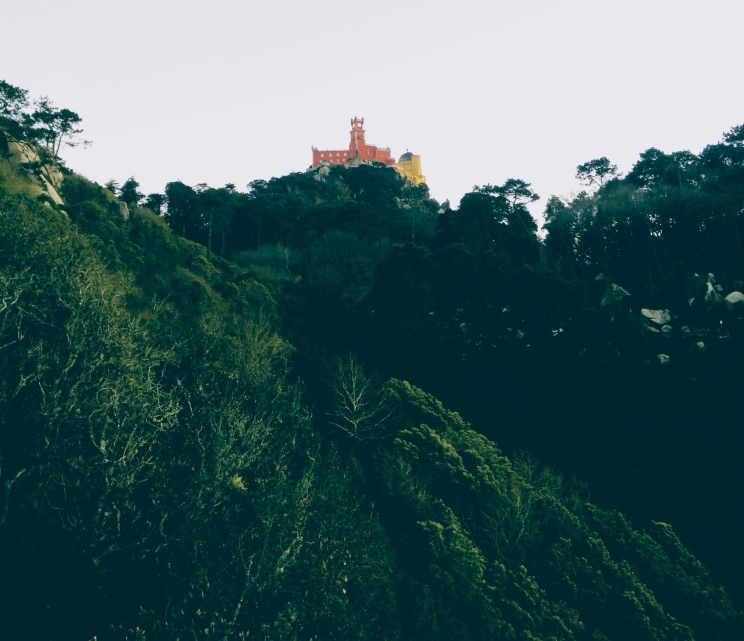 The castle on the top

Searching for climbing partners was absolutely not easy, yet the one who seeks will find 🙂 . Through FB group I found Luca, an Italian that studies in Lisbon and we arranged to meet in Sintra for climbing. What has Sintra to offer for a climber? Slabs of course 🙂 . I haven’t been climbing slabs for a loong time, so it was a bit tricky and balancing, but NICE 🙂 . The best thing is that you can also multi-picth almost to the castle, so we observed the sunset after we finished the route. Luca was also free on Sunday, so we agreed to go climbing in Cascais, because I wanted to try out that climbing area as well.

What is nice in climbing in Cascais? While climbing you are listening to the sounds of waves that are crushing to the cliffs… Climbing during the winter on the beach in a top is a nice thing, but the downside of the warmth was that my fingertips were sweating so much that all the holds became slippery as hell. Anyway the climbing day was perfect and what was even more awesome was that my climbing partner soon became my new host, since he had a free couch in Lisbon 🙂 .
Moving back to Lisbon and walking the steep streets with a trolly is not that pleasant after a long walk to the climbing spot/climbing/long walk back to the train station, but doable 🙂 . Lucas shares his flat with one Greek and one Italian girl and they had a AirBNB guest from France. So in the morning I got to know Simon from France, that was spending his last hours before his flight back and he showed me around Lisbon on a three hours tour. It is always funny when a foreigner is showing a foreigner a foreign city, best combination ever 🙂 . After he left, I spend some time with Lucas flatmates and in the evening we had a nice dinner together and went to some alternative cinema to watch a 60s horror movie The brain that wouldn’t die. I find it interesting to see how at that time the movies had more intellectual scenes then nowadays, because there were none special effects to cover the bullshit like today. After the movie night I needed to hurry up with packing my stuff and go to the airport and to wait for my flight at 6 a.m..

As spontaneous as my trip started, it also ended. Having no expectations means there is no room for disappointments.  I allowed myself to get surprised every day and this made my trip unforgettable. Traveling is not about getting to see what millions before you already saw, it is about discovering what is beautiful for you and to be able to see it, you need to get into unknown and experience it.